A duplicate of each column that can be claimed by the county as their own memorial.

A duplicate of each column that can be claimed by the county as their own memorial.

Reconciliation: The National Memorial for Peace and Justice

2020 was a year of reckoning for the United States when we seemingly reached a tipping point in the collective understanding and acknowledgment of racial injustice and systemic racism precipitated by the murder of George Floyd last May in Minneapolis. It was an occasion for intense reflection for architects and most citizens on the inadequate distance we have come and the considerable work we need to do to advance racial justice in every sphere of life. In the wake of this pivotal moment, it is instructive to visit and examine memorials for the lessons they offer of past events or periods that they commemorate. 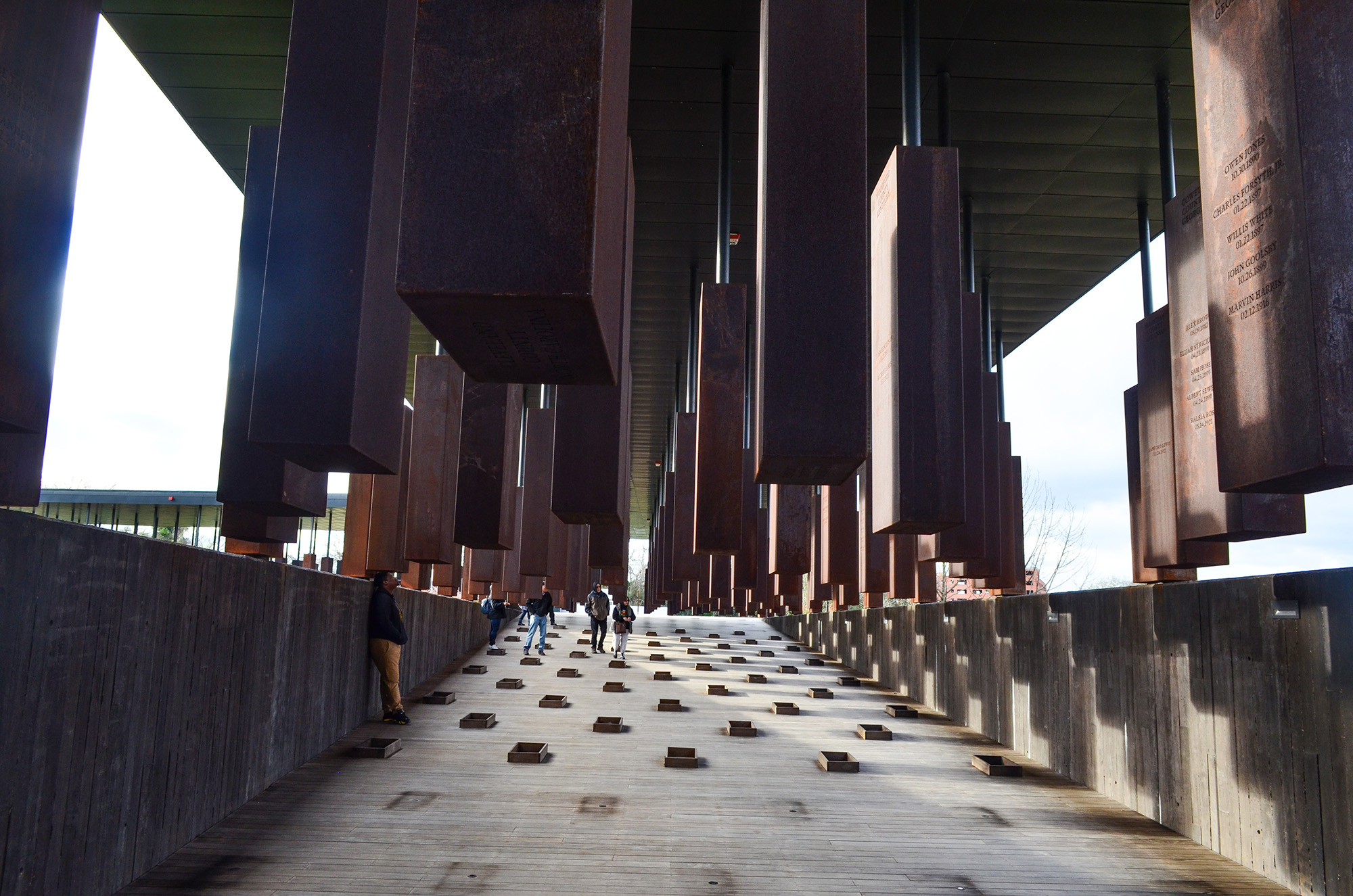 The undulating field with columns above

Memorials are repositories of collective memory for those people whose loss and grief are commemorated by their making. This collective memory expands with time to include anyone who chooses to understand the past and reflect on the present and a future consciously avoiding the failings and pitfalls of troubled pasts. Hence collective memory is constantly evolving and makes the memorial a living cultural artifact beyond a historical marker. With time, a certain universality of shared experience, either real or imagined, outgrows the memorial’s particularities with a “this could happen again and to anyone, including us” sentiment.

Memorials have been made to commemorate any facet of varied pasts: wars with specific start and end years are on one end of the spectrum. The Vietnam War Memorial by Maya Lin in Washington, D.C., exemplifies the war memorial and the abstract memorial genre. Abstraction in a memorial opens it up for interpretation of diverse meanings to those who visit and experience it, and each experience and the meaning it generates is different. Running one’s fingers over the name of a loved one or that of a stranger inscribed on the Wall of the Vietnam Memorial becomes a powerful experience replete with meaning.

1: Wall with metal strips relating everyday stories behind some of the lynchings.; 2: A cluster of stelae overhead.

Some memorials commemorate periods in history — that may not have a discrete set of events — when cultural erasure and systemic racism have been perpetuated over centuries that continue to present times, though they may be proscribed constitutionally. Such practices, now covert and still systemic, profoundly affect the psyches of entire peoples. The memorials of the Civil Rights era exemplify this category. With Atlanta considered the center of the Civil Rights Movement, several monuments are within a two- or three-hour distance. The most recent additions to these sites are The Legacy Museum: From Enslavement to Mass Incarceration and the National Memorial for Peace and Justice, both located in Montgomery, Alabama. Not far from Maya Lin’s Civil Rights Memorial, the Legacy Museum sits in a former warehouse downtown where Black people were enslaved. These memorials’ roles are to commemorate a bleak period in our history and show us the path forward in understanding how otherness of cultures by a dominant culture is effected and how society can bridge the gap with otherness. 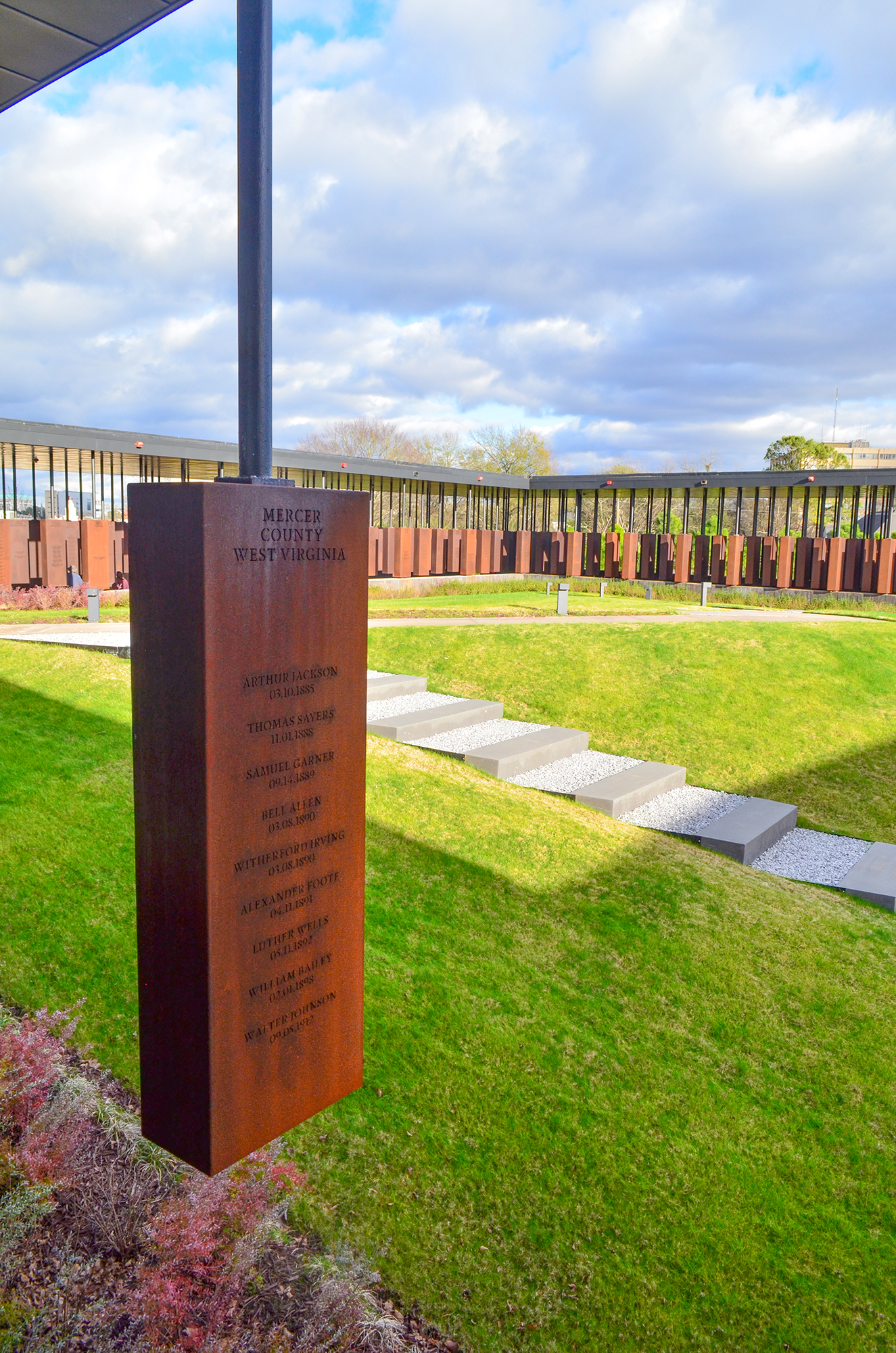 View of the interior court.

The National Memorial for Peace and Justice, the memorial for victims of lynching, is a short drive from the Legacy Museum in historic downtown, which is replete with markers of slavery and racism. Conceived and designed by Bryan Stevenson of the Equal Justice Initiative with MASS Design Group, it opened in 2018 along with the Legacy Museum. We visited it a few months thereafter. The Memorial encloses a central court. Hanging off the four quadrants’ ceilings that form the court are 805 hanging six-foot-tall stelae or columns of rusted steel, each representing a county where a lynching took place, mostly between 1877 and 1950. Columns representing counties each bear the names of roughly 4,400 documented lynchings in this period. (A recent study documents 2,000 more lynchings during the Reconstruction period.) Each column has a duplicate set horizontally in a field outside for counties to claim them and create memorials of their own. The columns in the quadrants hang at the same level, while the floor slopes. It is like walking in an undulating field with a forest overhead. 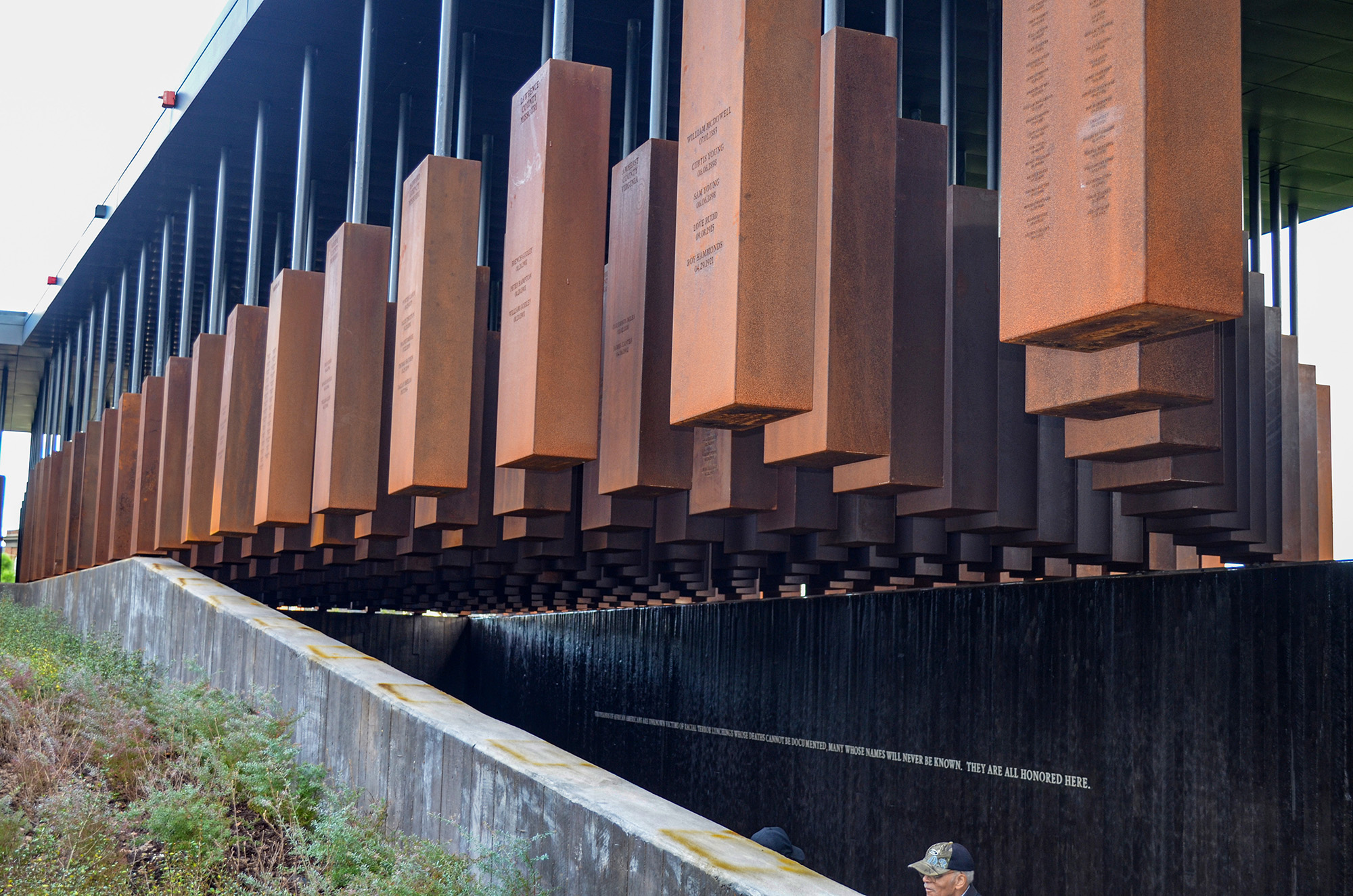 View from the periphery.

The resolution and reconciliation of forces to the ground convey the feeling of stability in architecture, and older buildings derive part of their aesthetic from elegantly exude these forces through massive structural elements like columns and beams. Modern buildings don’t necessarily rely on the structure for their aesthetic, as materials are stronger, thinner, and less massive. We get a sense of existential unease when these steel columns, individually slender but collectively massive, loom overhead, unresolved and unreconciled with the gravitational forces of the earth. And in the context of the memorial, when we consider the columns’ meaning, the unease is profound; the walk in the field is somber and moving.

There are inscriptions that provide the stories behind some of the lynchings: ordinary and everyday acts that ended in unjust death. A minister performing an interracial wedding. A construction worker insisting that a white co-worker return his shovel. Addressing a white police officer without using “Mister.” Getting mistaken for possessing drugs. Going out jogging on the street. Sitting in the car after getting something from the store.

The second half of this catalog of ordinary acts are events in 2020 that led to the killing of Breonna Taylor, Ahmaud Arbery, and George Floyd from the era in which we live. The memorial reminds us, for the task of memorials is to remind, that we are all in a charged field with the weight of these racial injustices looming on us. To ignore them or passively observe another gruesome spectacle is to be complicit. Reconciling and resolving the division and the gap so that someday the overhead forest meets the field, and the unease is lifted, is slow, difficult and painful.

But we are all in the field, each of us.

The Saving Grace of Outdoor Space