By Clayton Daspit, AIA | Renderings courtesy of The Beck Group

This story appears in Design Equilibrium 2019. The issue is available now.

Phipps Plaza is celebrating a new phase of development and transformation in its 50-year history. The new development, by The Beck Group, features a Nobu Hotel and Restaurant plus a 13-story office building. A Life Time luxury athletic and coworking destination, combined with a curated dining and entertainment experience, complete the trio. These will all be linked by an outdoor event venue and public green space, replacing a former multi-level department store.

Order a copy of Design Equilibrium 2019 > 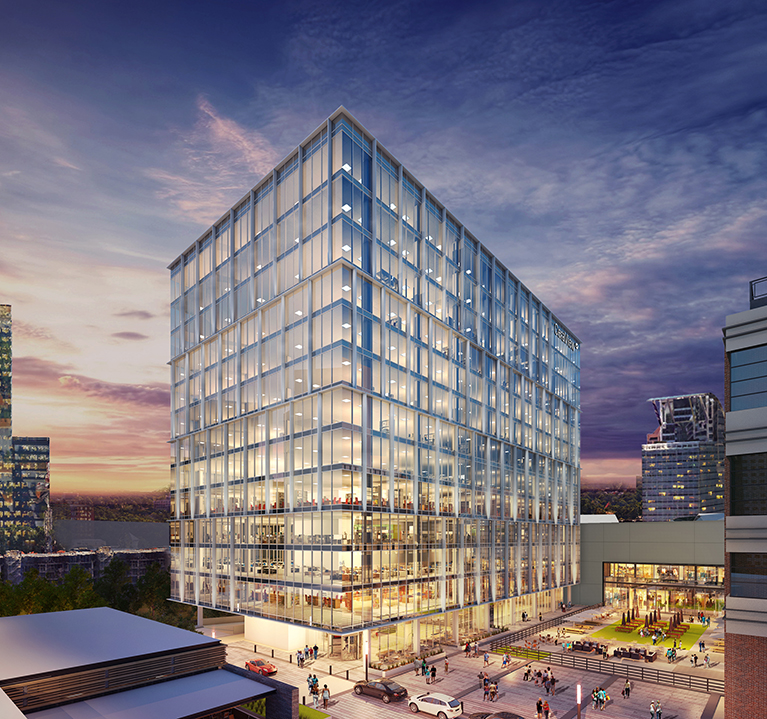 Phipps Plaza debuted in 1969. It was the first fully-enclosed, multi-level mall in Atlanta. It featured a grand central court centered on the single-screen Phipps Plaza Theater, with two wings anchored by Saks and Lord & Taylor. Located across the street from Lenox Mall, which opened a decade earlier, Phipps appealed to a discerning, luxury-oriented clientele.

Phipps Plaza is on the north side of Peachtree Road, which follows a natural ridgeline through the city. It followed planning concepts consistent with 1950s regional suburban malls with the advantage that the falling grades allowed most parking to be placed below the mall. This reduction in surface parking allowed Phipps Plaza to be closer and have a stronger presence on Peachtree Road.

The coming decades brought significant development to Buckhead. Phipps Plaza improved and expanded to meet expectations of modern-day shoppers, cementing its status as the luxury shopping destination in Atlanta and the Southeast.

The mall underwent a major expansion and renovation in the early 1990s. Shoppers enjoyed a new wing with a food court, 14-screen AMC theater and a 170,000-square-foot Parisian anchor store. Designed by Thompson, Ventulett, Stainback and Associates (now tvsdesign), Phipps boasted an overall upgrade and facelift, reinforcing its image as an upscale, high-fashion experience.

In the 2010s, Simon began its relationship with The Beck Group, the integrated architecture and construction firm. Beck led the effort necessary to continue improving the experience at Phipps Plaza, including parking and interior upgrades. There were also dramatic changes to the entrance and façade, allowing for more individuality for tenants’ branding. The new architectural variety and signage also improved visual interest for visitors.

Creating a Lifestyle Destination for the Future

Simon is a leader in premier shopping, dining, entertainment and mixed-use destinations and creates innovative experiences across its properties.

The Simon team enlisted Beck to achieve its vision for a new Phipps Plaza and reinforce its reputation as one of the county’s most exciting lifestyle destinations.

The Simon and Beck teams saw untapped potential in the north end of the property, where the Belk department store and its parking deck are located. This area offers prime visibility and access thanks to its proximity to the GA-400 and Lenox Road intersection.

Using 3D modeling and the real-time estimating software DProfilerTM, Simon and Beck explored strategies for maximizing the site’s potential and providing accurate costs for a range of development options. A hotel, office tower and lifestyle/dining building sit on a new, more efficient parking structure. This combination is the ideal orientation for the site.

A solid ROM cost estimate, combined with conceptual design plans and renderings, gave the project a sense of life and achievability. Nobu, the preeminent modern luxury brand, committed to becoming the flagship for the new luxury hotel on the site’s most prominent corner. 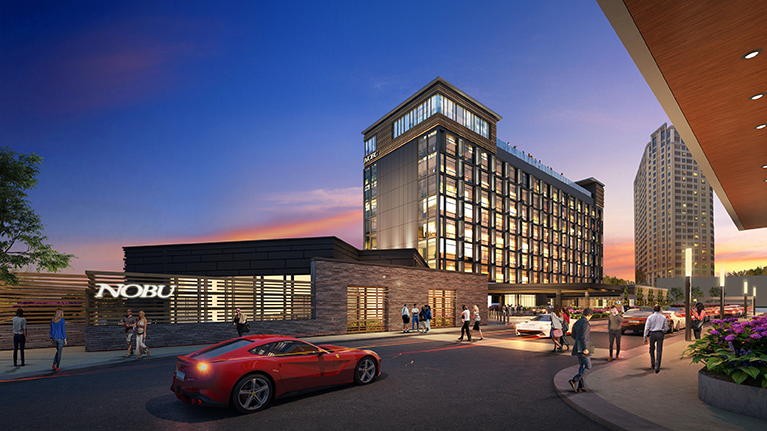 The Vision Comes to Life, Despite Challenges

Bringing this new vision to life is predicated on removing Belk and the parking deck below and surrounding it. Removing the structures gives the design-build team a new buildable area in roughly the same footprint. However, existing utilities, pile caps and other structures create a below-grade obstacle course difficult to navigate during planning and construction.

At the same time, attachment to the existing mall creates another set of challenges. Beck’s design team identified the critical conditions and connection points to define the starting parameters of the project.

Before the project could start, the team successfully conquered another challenge: designing and moving an existing fire station, located under the parking deck, to a new location on the property. The City of Atlanta Fire Station No. 3 was designed, built and occupied by its crew all in less than one year.

In late 2017, design began in earnest and the project advanced rapidly, responding to evolving building programs as they became more refined and targeted.

An outdoor event plaza was added to support a variety of events. The addition enhances the sense of shared public space and links the other program elements. Beck’s integrated process allows for cost checks throughout the design, allowing course-corrections to happen early and reassuring Simon that the project remains on budget.

The ambitious design creates a composition that effectively serves the hotel, office and anchor building. While each is unique, the three buildings complement one other and define the exterior spatial experiences.

Order a copy of Design Equilibrium 2019 >

The Nobu Hotel and Restaurant

The hotel is inspired by the distinctive style of the Nobu brand’s inventive interiors. Its façade recalls the modularity of Japanese architecture and the recessed cells of bento boxes, with metal, copper and charred-wood materials meant to engage the senses.

As a guest approaches, the design reveals itself in layers from the screened motor-court drop-off to the hotel lobby to the restaurant. The uppermost floor highlights a two-level “super suite” with access to a private pool overlooking sweeping vistas.

One Phipps Plaza is the 350,000-square-foot Class A office building of the trio. It is inspired by the simple, elegant lines of mid-century modernism, the architectural era in which the mall was constructed.

The rectilinear form of the building features a series of frames that subdivide the façade. The frames are interrupted at key locations to highlight the entry and upper floors with their panoramic skyline views. The lobby is a graceful, transparent space that engages with the shared outdoor event venue and enjoys proximity to the amenities of its companion buildings.

The anchor building is a true mix of uses. The building’s design evokes a refined warehouse-industrial aesthetic, harkening back to Atlanta’s heritage as the major mercantile hub of the southeast.

Visitors and shoppers can experience the entire development by walking through this building, which links the hotel to the mall and Phipps Boulevard to Peachtree Road.

With a target completion date of spring 2021, the transformation of Phipps Plaza is one of the most ambitious projects in this region. Its scope alters the legendary Atlanta luxury retail landmark, elevating it to a one-of-a-kind, globally-recognized, mixed-use destination.